Jardin Sirocco Foundation plans to build 37 power plants in synergy with its reforestation plan and the establishment of a water desalination plant. The electric potential is fabulous. In six hours, deserts receive more energy from the sun than the entire human race consumes in a year. the German physicist Knies tells us to develop solar energy. The permanent dissipation of the cloud cover allows sunshine and uninterrupted thermal radiation.

The resource is enormous, it is based on the fact that each km2 of desert receives annually a solar energy equivalent to 1.5 million barrels of oil.

The chosen technology is the one already experienced on an industrial scale: the concentrating solar power plant (CSP). It is a plant that concentrates the sun's rays using mirrors to heat a heat transfer fluid that generally allows electricity to be produced. This type of plant allows, by storing this fluid in a tank, to prolong the operation of the plant several hours beyond sunset.

Solar thermodynamic technologies have a major advantage over photovoltaic: they allow to prolong the production of electricity beyond the period of solar irradiation, with an additional investment, by storing the coolant in tanks to be able to extract the heat several hours after sunset.

For example, the Solar Two solar power station can still operate three hours after the sun is gone. Energy storage is done at the generator inlet as heat (560 ° C) in molten salt tanks, which allows the plant to continue operating in the absence of the Sun.

Under prospective scenarios established under the auspices of the International Energy Agency (IEA), concentrated solar thermodynamics will play a significant role in global electricity generation.

Advantage of the process

The updated electricity production costs (LCOE), renewable for the thermodynamic solar system, indicate the costs of parabolic trough technologies, with a six-hour storage system, at $ 0.17 to $ 0.37 / kWh. Assumptions of an investment cost of $ 3,400 to $ 4,600 / kW and a load factor of 20 to 27%, the lower end of the range corresponds to highly competitive projects (excluding OECD) in countries benefiting from 'exceptional sunshine.

The cost is strongly correlated with sunshine: starting from a base at 2 100 kWh / m2 / year (typical DNI sunshine for Spain), the LCOE cost decreases by 4.5% for each 100 kWh / m2 / year and more. These 2012 costs are expected to continue to decline as a result of technological advances and economies of scale. 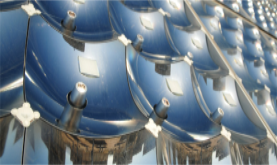